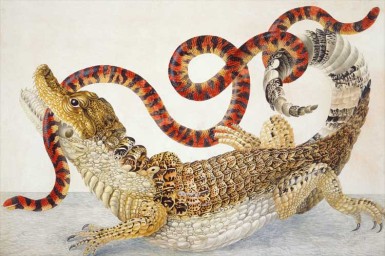 So it is with the game of war
played out across the globe
The US, the big fat crocodile

Everyone else worldwide
viewed by our military leaders as
slippery, needlekiller snakes

Croc’s jaws are mighty,
but venom has its own power

Mama Zen’s Words Count prompt at Imaginary Garden With Real Toads gave us several gorgeous scientific images by Maria Sibylla Merian. I chose this because I could not ignore the balance of this drawing; and yet, there’s also an imbalance. So size “matters,” but the lithe serpent has fangs. This could go either way. The huge, well-fed croc (America) seems to have control over the snake (pick a country), but will that be the end? Or shall the snake morph into Medusa, exacting her own revenge… or quagmire?  As a tiny scale on that croc, I wish I had some sway, some say, over who the hell is grinding our military jaws in MY name.  Both let go, everybody wins.  Aren’t we above animal games?

NOTES ON ILLUSTRATOR: Ms. Merian was a woman ahead of her time. She traveled (with her daughter and – GASP! – no male guardian) in 1699 to South America to illustrate wildlife. Click on the “Toads” link to see more of her artwork, which is all public domain. The name of her insect collection, published in 1705, is Metamorphosis Insectorum Surinamensium; however, this is obviously from another collection.

Also posted at my snake-free swamp (in the very best M*A*S*H sense of the word), Poets United.  Peace, Amy